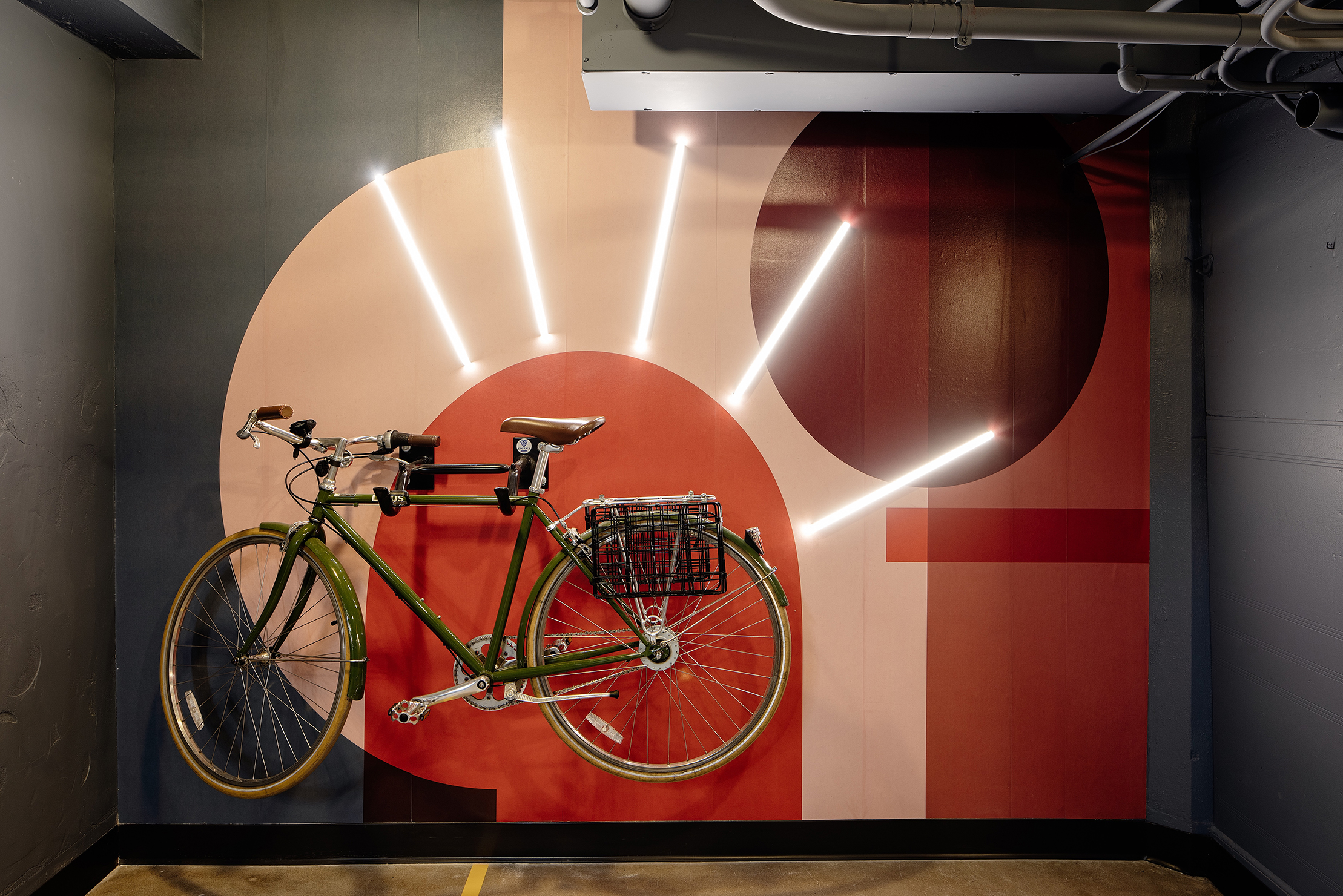 In early 2020, TMT Development contacted Ankrom Moisan Interiors to design several small tenant improvement projects in the Studio Building and the Fox Tower in downtown Portland. The Studio Building at 919 SW Taylor is one of the oldest buildings in the downtown center, built in the 1920s as a musical conservatory. Now housing modern office space, TMT desired to add a bike room amenity to the existing basement, to provide tenants with ample bike storage, two shower rooms, and a bike repair area. 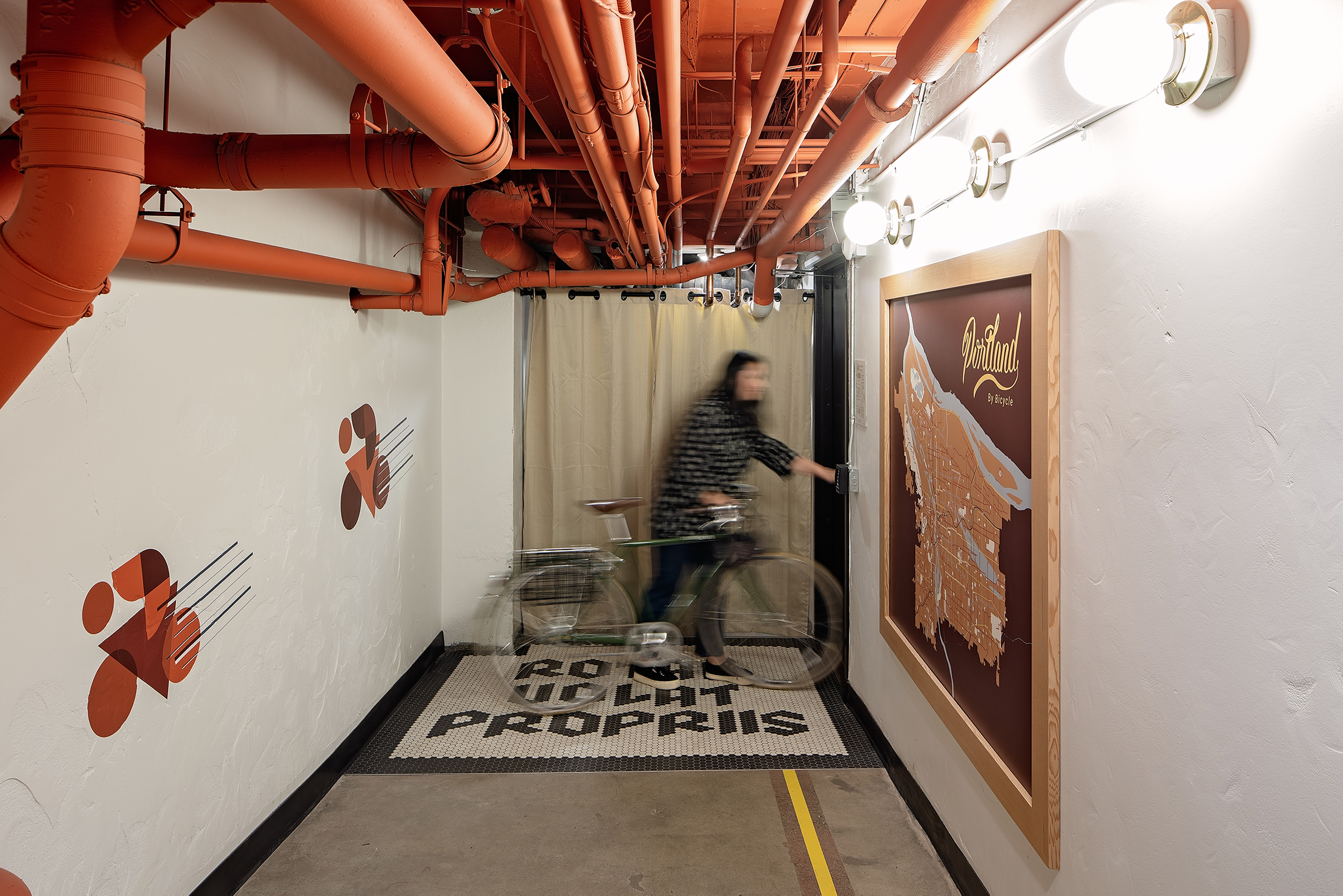 Roberta Pennington, the project manager, looped me (Maddy) into this project as the designer, and we went far beyond TMT’s expectations. Inspired by the historical music background of the building, we presented two musically inspired design options: Jazzy & Classical. Ultimately, TMT decided to move forward with the vibrant and energetic Jazzy scheme to bring more life into the existing spooky basement. “Jazzy” pulls inspiration from vintage jazz posters, historic palettes, and art motifs of the 1920s and 1960s jazz eras.

Working within the existing dark, concrete basement, we strove to brighten and enliven the space while creatively guiding employees from the elevators to the bike room down a long hallway. Being a budget-conscious project, we used simple and inexpensive design moves to add major impact and character to the space and keep up with the fast-paced timeline.

First, old, unused pipes and conduit were removed from the existing ceilings of the hallways and storage room (which would eventually become the bike storage space). The remaining pipes and structure were then painted with vibrant colors to not only create a beautiful, cohesive aesthetic, but help group what would otherwise be chaotic and overwhelming utilities into a visual whole – the Gestalt effect. Dozens of exposed pipes became a sculptural, colorful ceiling.

The existing concrete floor remained, but was cleaned and repaired as necessary. Keeping an existing painted red stripe on the floor (which led to fire suppression equipment down the hall), we incorporated this into the design as a wayfinding feature by adding a simple yellow stripe on top to connect the spaces (confirming that altering the stripe wasn’t against code). We also added a special custom tile inset signifying the entry to the bike room. Working with the AM Brand team, the design is a play on Oregon’s motto “She Flies with her Own Wings,” becoming Rotae Volat Propriis, or “She Flies with her own Wheels.” While Daltile can manufacture custom mosaic tile layouts onto their mesh backings, this added significant time and cost to the project, which we did not have. Instead, we simplified the tile design and reduced it down to two colors, and ordered whole sheets of black tiles and whole sheets of white tiles. The tile installers only had to swap individual tiles to create the lettering. By having the majority of the layout already adhered to the mesh backing; this saved time and cost in the end for the custom design & install. In the shower rooms, we used a waterproof uncoupling membrane underneath the new tile floor, allowing the tiles to move separately from the building structure and help prevent cracking and damage. The irregular cement tile floor design was inspired by the night sky often seen in jazz posters.

The walls in the elevator lobby, hallway and bike room were treated simply and inexpensively with fresh paint. Near the elevators, we created a bike repair wall, featuring decorative wallpaper inspired by simplified Art Deco shapes. We tested the durability of multiple wallpaper materials by scratching samples with our house keys, to ensure the wallpaper would hold up to expected bumps and scratches in the future. We added simple linear light fixtures following a curved arch shape on the wallpaper, visually suggesting sound and expression of excitement. In the hallway, our Brand team riffed off the wallpaper shapes to design custom wall decals to abstractly resemble racing bicyclists. These also act as a wayfinding feature to the bike room. At the bike room entry, a custom-designed Portland biking map is framed and mounted to the wall. The walls and plywood are painted a vibrant red-orange, electrifying the experience. The bike racks and lockers are painted a different shade of red-orange in contrast, resulting in an unexpected explosion of color. Inside the shower rooms, the walls are lined with recycled clay tile from Fireclay Tile, making each of the tiny shower rooms fully waterproof and beautiful. Custom half-moon mirrors add another Art Deco element to the scheme.

Overall, the design and finish decisions resulted in a project that was within budget, on time, and made a huge impact on the user experience. 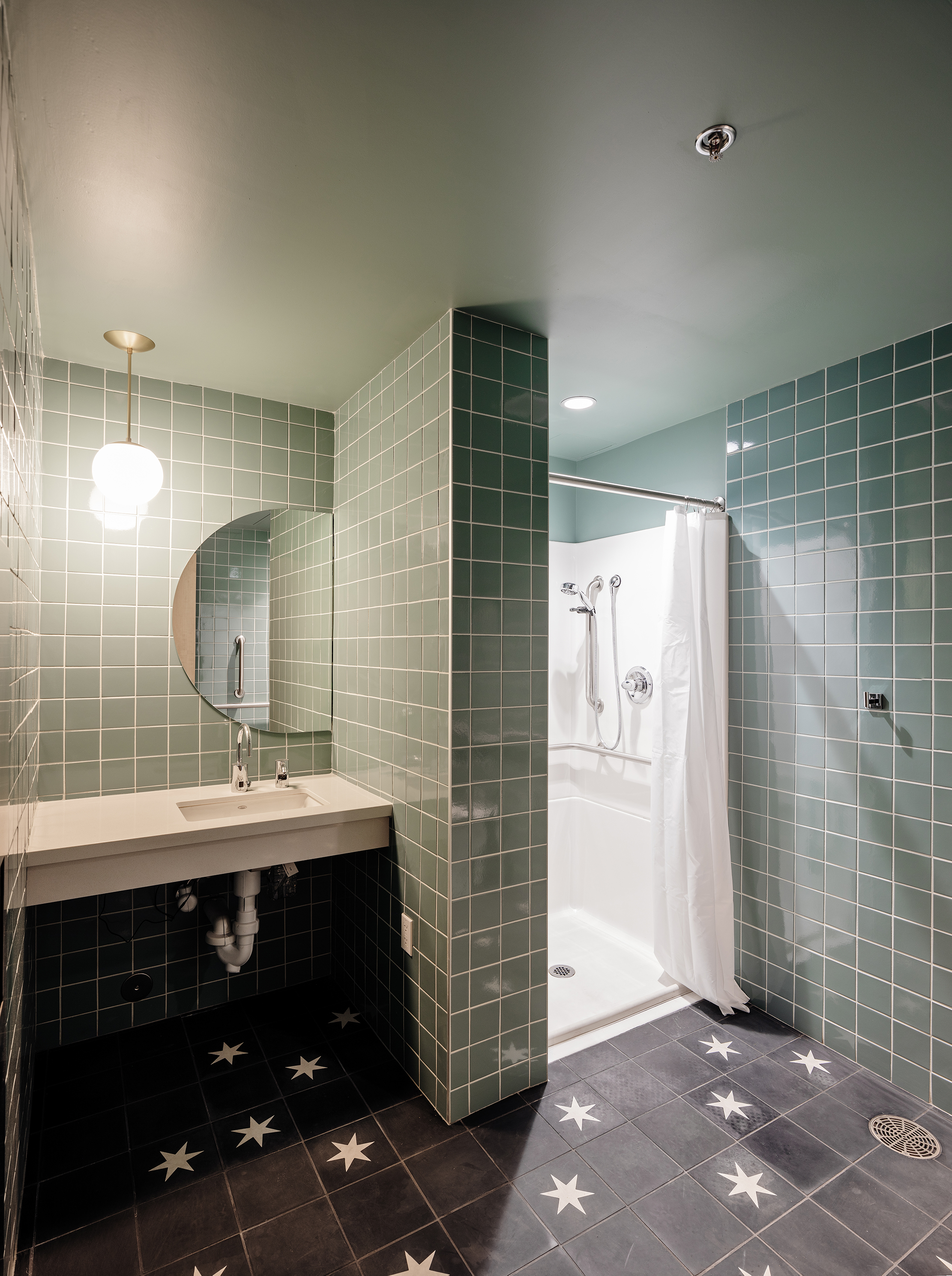 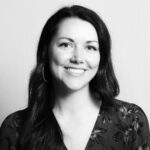 Maddy Gorman is a certified Interior Designer specializing in Workplace design, based in our Portland office since 2015. In her free time, she enjoys elements of discovery whether that is in nature, finding new delicious food combinations, uncovering patterns and stories through Tarot, exploring inward while lying still in a float tank, or traveling the world.