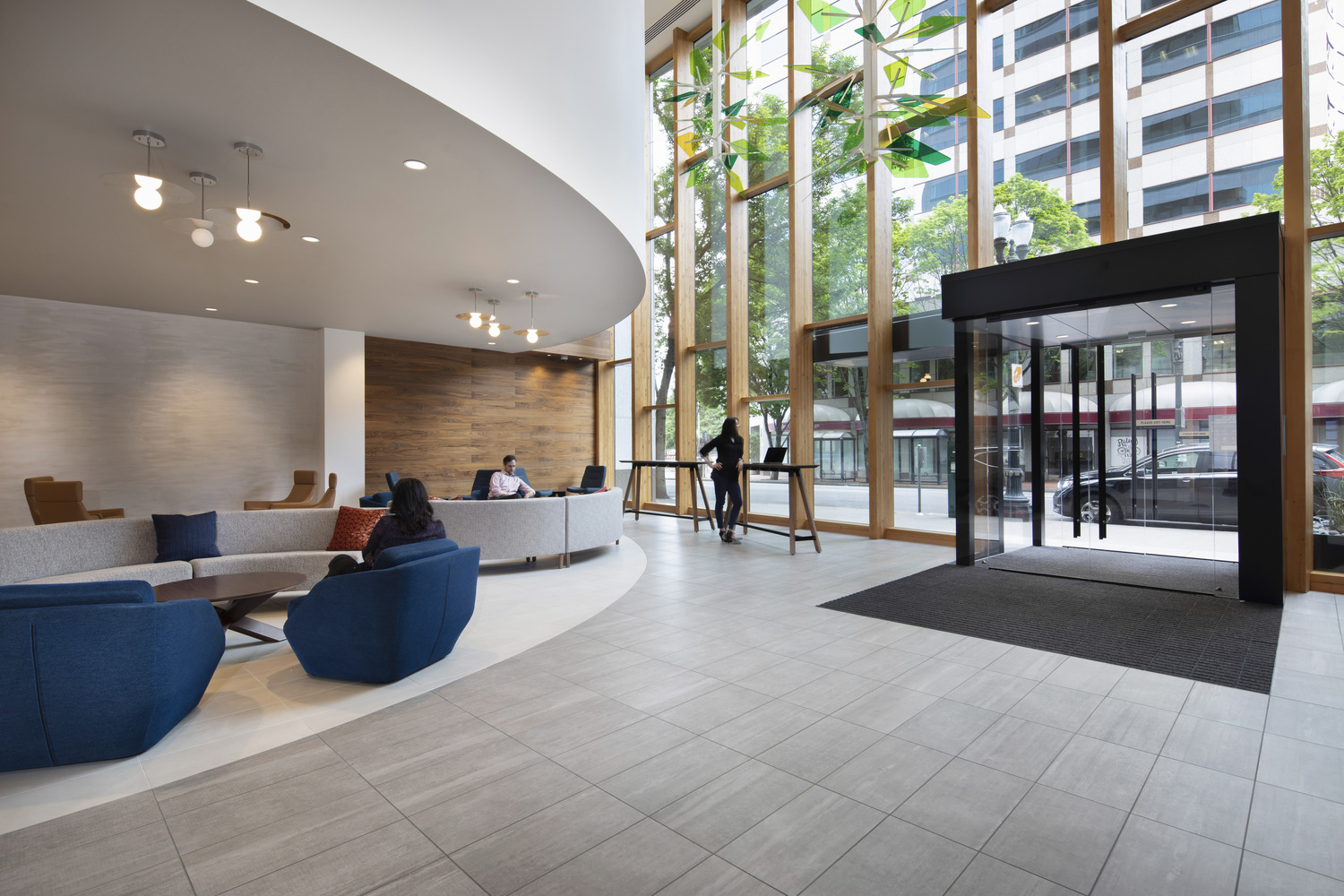 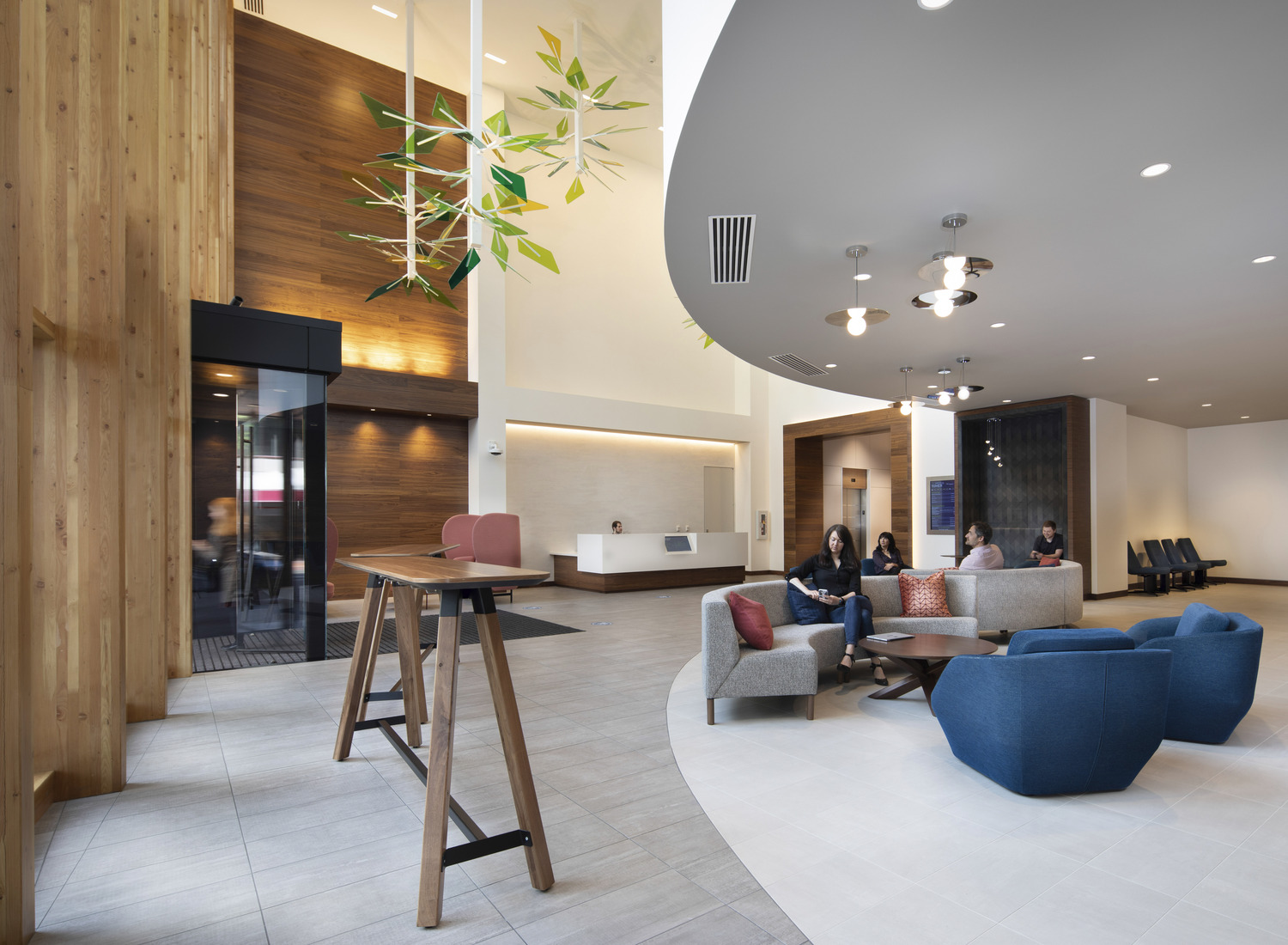 Through a phased design and renovation approach, we have begun to modernize Moda Tower with airy, clean aesthetics. We began in the lobby, the space that sets the tone for the rest of the office building, installing our first mass timber curtain wall with the goal of creating a canvas that activates the new public art at its heart. The next steps were updating the fitness center and lounge, including a roof deck and conference center, on the 9th floor. These amenities provide Moda Tower’s tenants with functional and enjoyable spaces that they might not have in their own offices. 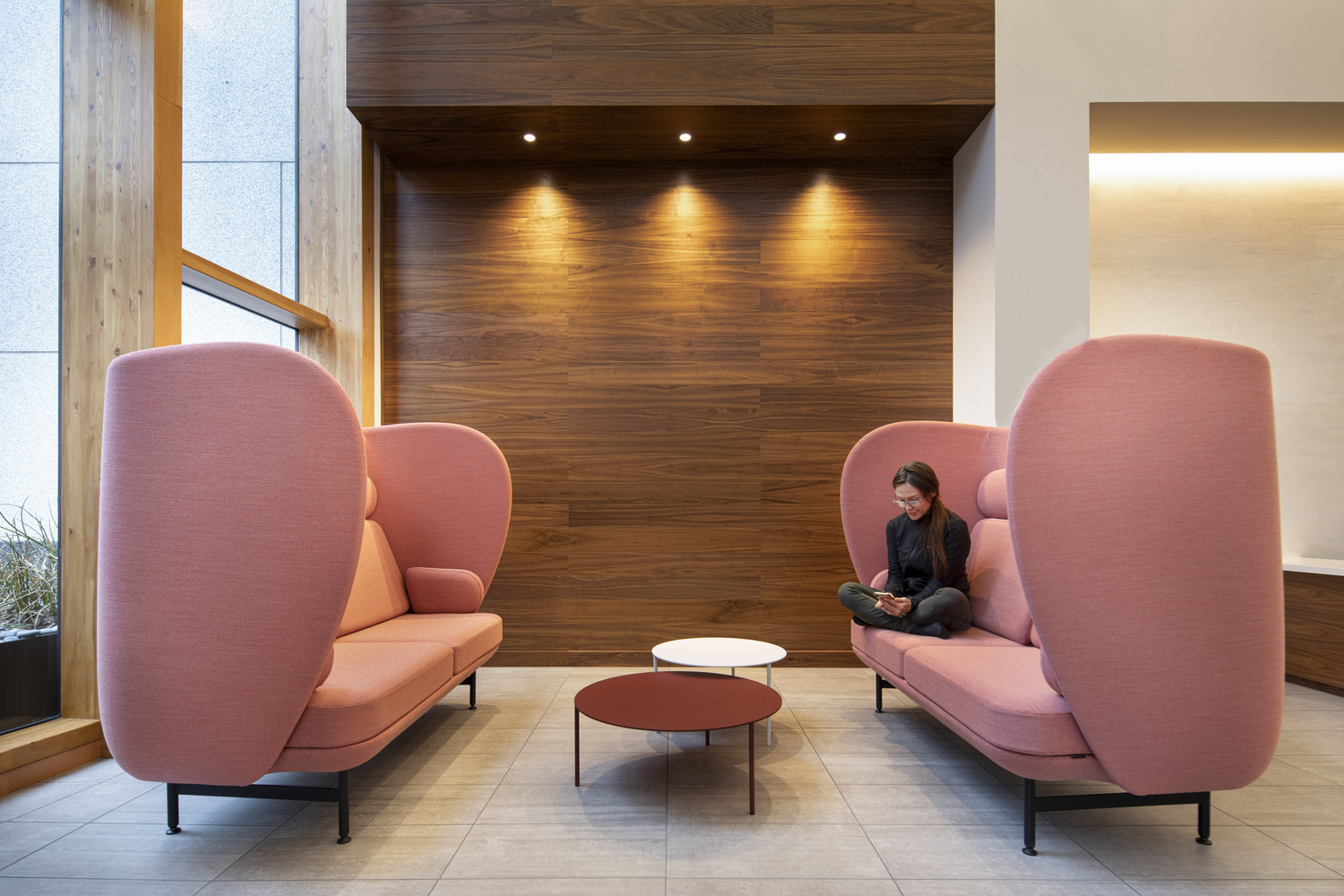 Before the renovation, Moda Tower’s shared spaces were small, dark, and relatively constricted, with tiny windows and mix-matched styles, like many other large buildings. Coordinating with our client Unico and Portland-based artist Joe Thurston, we envisioned a lobby redesign that would uphold his idea of a springlike forest canopy—the feeling of trees reaching toward each other against the sky—suspended 30 feet up, just inside the lobby of Moda Tower. More than just a gallery, our natural mass-timber curtain wall and the renovated lobby itself would become integral parts of Thurston’s artwork. Effectively renovating a lobby for public art means more than just designing, say, a white gallery box. The renovated space should elevate the artwork. It should be functional, accounting for practicalities like circulation, lighting and climate, and code. The space should make people pause and give them something unexpected. After decommissioning the long-standing previous artwork, we enlarged the lobby itself, opened up the windows, and replaced the dated flooring with bright, crisp materials. The new mass-timber curtain wall is now punctuated by wood-accented white walls. Warmth and light now flow through the lobby. The glass leaves of Thurston’s tree-inspired artwork hang from the lobby’s ceiling, augmented by our expansive, not-quite-neutral, inverted gallery space. Colorful reflections play across the lobby as each morning turns to evening. From the outside, passersby are treated to a bright, vibrant extension of Portland’s forests. If Moda Tower’s renovated lobby, and the artwork it elevates, can help people slow down even for a moment—to look up and think, even briefly, about spring leaves stretching out toward others—we have succeeded. Traveling up to the 9th floor’s newly renovated amenity spaces, we have carried through similar bright, modern design–intending for the aesthetics to be related but not identical. The new elevator lobby is painted a warm, crisp white that almost glows in contrast with dark wood wall coverings tying back to the main lobby. For the lounge, we incorporated mid-century modern touches in the furniture, wall coverings, and muted color palette. With some bold details throughout, it is refined and styled but still neutral enough for each tenant to feel comfortable and adapt the space for their use. The conference center is designed to be rearranged for different needs, be it a speaker, trainings, or large gathering. The lounge offers space for relaxation and entertainment with surround sound, beverage taps, shuffleboard, communal tables, and gaming consoles. Intentionally positioned seating areas take advantage of Moda Tower’s floor to ceiling windows offerings views of the city. What was once an undesirable, vacant concrete roof has now been revitalized with stylish wood decking, outdoor seating, and plantings. The roof deck is accessible on one end as an extension of the lounge, and on the other end for the fitness center; Imagine during the warm seasons starting the workday with roof deck yoga and meditation. Inside, the all-encompassing fitness center contains stretching and workout zones, a studio for classes, and locker rooms. With our designer’s vision and our client’s trust, we are reshaping the experience of Moda Tower. Clean, modern aesthetics enliven the lobby and 9th floor as nature-inspired public art and roof deck access enmesh the interior spaces and the exterior surroundings on multiple levels.

Rebuilding SAIF from the Ground Up

A Redesign Driven by Values

History for A New Generation

From Penthouse to Workplace

Where citizens become a community.